I Read The News Today...

...with a sickening sense of foreboding. Two teenage girls, just 14 and 15, held hands and jumped together to their death last night from a high bridge not too far from my home. There was a girl I was thinking of, hoping it wasn’t her. All I can do is mark her short life here. RIP Georgia with the puppy-soft eyes.
Posted by JULIE BERTAGNA at 8:39 PM 3 comments:

Once upon a time there was a world...

On a brief skive from the last great heave on AURORA, I clicked on a Guardian podcast on 'climate change books' and heard the lovely Sarah Crown from the Guardian books blog saying very nice things about Exodus and Zenith (about 23 mins in). It was a little gift from the ether. Moments before, I'd hit a Friday afternoon slump, telling myself I'd get somebody to slap me if I ever had the urge to write an epic trilogy ever again. I really just needed a Kitkat.

The podcast is worth a listen as there are a number of good books discussed - some of my own favourites like Cormac MCarthy's The Road, poetry from Don Paterson and Sean O'Brien, Earth From The Air. Sarah finishes with a great quote from Philip Pullman about 'Thou shalt not' reaching the head, but what touches the heart is 'once upon a time' - the very words, as it happens, that Exodus opens with and Aurora ends on.

The podcast and booklist is HERE.

A few more links I've been too busy to put up before: THE BOOK SMUGGLERS on YA apocalyptic-dystopian fiction. And HERE. Some Glasgow Dystopia. And I loved the look of IN SEARCH OF GIANTS.

Next blog, a moving Once Upon A Time...
Posted by JULIE BERTAGNA at 1:45 PM No comments: 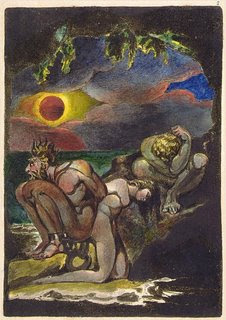 "Work as if you live in the early days of a better nation" - Alasdair Gray.
On Friday, on The Times online, I spotted the most powerful poetic wake-up call by Philip Pullman to a nation sleepwalking itself into a state of fettered 'freedom'. I decided to grab a newspaper version; I was sure it would have an illustration by the 18th century poet-artist William Blake, as Philip roots his sleepwalking vision in Blake's poetic myth of Albion, the ancient name for Britain. And I was right. And just as well I did buy the paper because a few hours later, when I tried to link the online piece to this blog, it had vanished into the ether, into the mysterious Lost Dimension of 404.

But the blogosphere came to the rescue as bloggers began, en masse, to post the piece that had vanished, because it needs to be read and thought about and debated - by all of us, but especially by the generation who are about to inherit the Earth in what might be the most crucial era in human history. So here it is, with thanks to Longrider.

More debate about the kind of world we want to live in here and here and the Modern Liberty Campaign .
Posted by JULIE BERTAGNA at 10:01 PM 4 comments:

Labels: civil liberties, Philip Pullman, The Modern Liberty Campaign, the mystery of 404 and things that vanish in the ether, William Blake 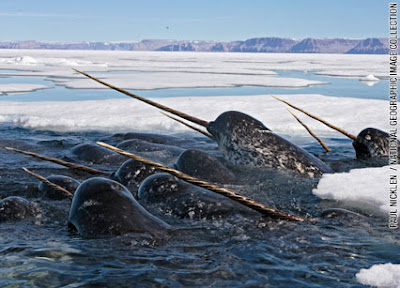 And here they are in ZENITH:

"There is no moon but the sprinkle of starlight picks out a dazzling mosaic of ice that is so fragile it shifts with the movement of the sea. And there is something else. A long, silver point is sticking up out of the thin crust of ice.
Mara screws up her eyes. It looks like a sword.
The silver sword vanishes then re-appears further in front, breaking a path through the icy waves. Another sword rises out of the ocean, surges towards the first and crosses it. Mara gasps as the swords clash then vanish.
Narwhals.
She only saw them once on Wing. Great, shell-encrusted whales, far out in Longhope Bay. Island folk legend said a speck of ground narwhal tusk a day would make you live a hundred years or more, just as the narwhals do.
A narwhal horn always points to the North Star."

Nature's Great Events: The Great Melt is on Wednesday 11 February on BBC One at 2100 GMT
Posted by JULIE BERTAGNA at 3:39 PM No comments: 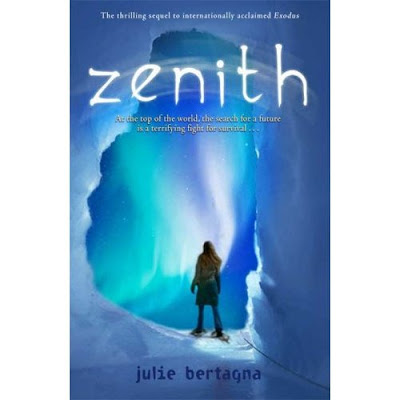 A nicely seasonal cover for the US ZENITH, coming soon.

It looks and feels a bit like this here in Scotland right now...

*Great interview in CYNSATIONS with my fantastic editor-of-old, Sarah Davies, who now 'grows' writers in her Greenhouse - a nice insight into the world of children's publishing from a publisher-turned-transatlantic agent.
Posted by JULIE BERTAGNA at 11:03 AM 8 comments: 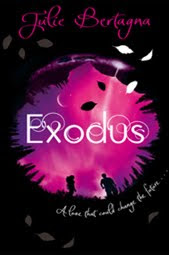 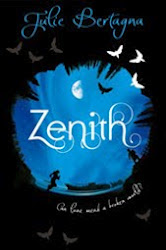 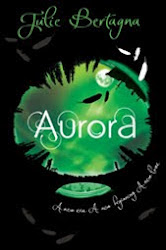 JULIE BERTAGNA
Scotland, United Kingdom
Julie Bertagna is an award-winning author and freelance journalist, who has been published around the world. The EXODUS trilogy (Exodus, Zenith, Aurora) is an epic story of the future, "one you will remember for the rest of your life" - Guardian. Visit juliebertagna.com to find out all about her BOOKS etc. Also @JulieBertagna on TWITTER and on FACEBOOK.